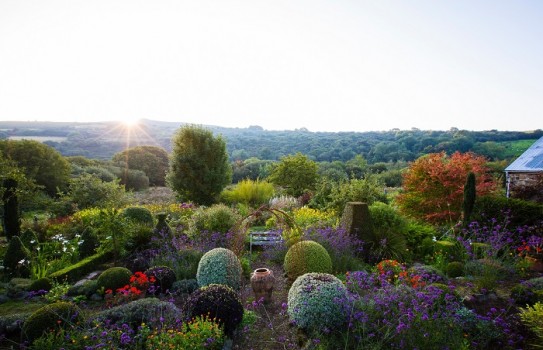 An exceptionally interesting and enjoyable garden' (Noel Kingsbury, The Garden).

Dyffryn Fernant Garden in Pembrokshire is a hidden gem set amongst the Welsh Hills and uplands near the sea. It has been lovingly created by Christina Shand who started the project from a wilderness in 1996.
Beginning with ebullient and colourful planting around the house, the garden works it's way out, gradually merging into the wildness beyond, the 'ancient and primordial' (Graham Sutherland) Pembrokeshire landscape including Garn Vawr, Mynydd Dinas (Dinas Mountain) and Carn Ingli (Angel Mountain).
The garden works as a whole despite having many distinct areas in its six acres; particularly impressive are the Front Garden, a tight burst of colour from spring to late Autumn, the Courtyard's mix of exotic forms and succulents and the unusual Bog Garden, centred by a shining quadrangular Obelisk.
Further down Nicky's Field, a series of fifty four-by-two metre ornamental grass beds which look fantastic in the wind, leads on to the pond. The self catered holiday cottage is situated right in the middle of the garden.

If you want to take a break near Dyffryn Fernant Garden, why not stay in one of our recommended hotels.  Look now - click here.