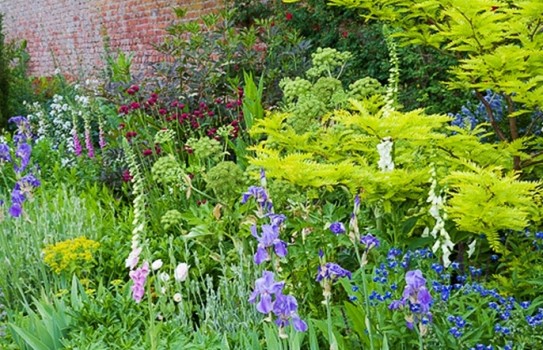 This beautiful Garden at The Laundry is open throughout the year by appointment with all proceeds going to the NGS. Several lovely areas including walled garden.

Although the walls are old, the garden at The Laundry is young. All of the planting has been created since 2008.
The garden that you can enjoy now is divided into three parts.
First there are the immediate spaces around our house. The house garden and Terrace, the pleached lime avenue, the Hall garden and 'Regent St', along with the rose border and North border (opposite rose border, not on this plan).
Then there is the walled garden, and finally the (wooded) area around the outside of the walled garden.
The history of The house is that it was the Laundry (and Dairy – they made butter there) to the Hall next door. the house garden is the old drying ground, and was once cobbled. The house dates back to approximately 1770, and the one acre walled garden dates to a similar time. Unfortunately there is little documentation as to the layout of the garden..some old o/s maps, and a proposed landscaping plan dating from that time. Some effort has gone into retaining the same path layout with deep herbaceous borders and a new cutting garden. The Pleached lime avenue was planted in 2008. The dragon sculpture arrived in July 2011.
A chance to see a relatively young garden being created by two passionate and creative gardeners.

If you want to take a break, why not stay in one of our recommended hotels. Each hotel has genuine guest reviews enabling you to book from anywhere in the world in total confidence. Not only do we feature hotels near the garden, we also feature hotels worldwide and at all major airports. Special prices up to 70% off standard rates as well as hundreds of exclusive deals. Look now - click here.